Home > Blogs > Mike Leach and Sovereign Immunity: One encourages strong leadership while the other discourages it.

Mike Leach and Sovereign Immunity: One encourages strong leadership while the other discourages it.

If you are a Coug fan and/or a Mike Leach (“Coach Leach”) fan, you’ve probably heard about the Texas Supreme Court’s most recent ruling in his wrongful termination and breach of contract suit against Texas Tech. Based on what I’ve read, part of Coach Leach’s claim against Texas Tech is that it intentionally terminated him to avoid paying over $800,000.00 that he would have received if he was allowed to finish out the final year of the contract. Because Texas Tech wrongfully terminated Coach Leach and breached his employment agreement, he is suing in part for the $800,000.00 that he should have received under the agreement. It appears that one of Texas Tech’s defenses is that, even if they did breach the agreement, they still don’t have to pay Coach Leach for the money he was rightfully entitled to because the claim and remedy is barred by sovereign immunity.

So if you are reading this, and you aren’t a constitutional law buff, you are probably asking yourself, “What is sovereign immunity?” Sovereign immunity is an old English common law concept that prohibited anyone from suing the Crown since the King was ordained by God. In the United States, state legislatures have passed statutes that provide broad protection for “state actors” who commit an act within the ordinary and normal course of doing their jobs. Such employees, and the entities that employ them, cannot be sued for damages because of their protected status. The rationale for these statutes is that government bodies need such protection to properly govern. Acts of government bodies (and the individuals who make up government bodies) will always offend someone.

Now, if you ask me, sovereign immunity makes sense in theory, but it should allow be applied in very narrow circumstances. As it stands now, a state employee, or institution, can do whatever they or it wants to a citizen (i.e. Coach Leach) and then when it comes time to face the music in a civil suit (i.e pay $800,000.00 for your wrongful conduct), the state employee or institution can hide behind sovereign immunity and be exempt from money damages. Does anyone else have a problem with providing the government with this irrevocable get out of jail free card? If anything the state and/or federal government should be held to a higher standard and face more severe penalties than the citizens. Instead, it is the opposite.

In my opinion, before any person or institution can be permitted to use this defense they should be required to read Swing your Sword, or any other leadership book from that matter. I’m sure they would soon discover that a common principle of leadership is to expect more from yourself as leader than from the people you lead. Hopefully then after a brief period of self reflection they would think twice about their wrongful actions and own up to them. If they don’t they should never be allowed to lead any group again.

Now, I do have to thank the defendants in Coach Leach’s case for treating him the way they did. If they didn’t he would probably still be at Texas Tech recruiting great players and having winning seasons. Fortunately for WSU, and the state of Washington, that isn’t the case. 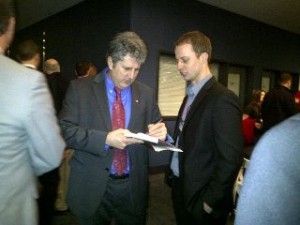 Finally, Coach Leach, if you ever stumble upon this post please know that I am very sympathetic to you and your family for the problems this case has caused all of you. I’m quite sure that the great state of Washington and the fantastic employees of WSU will never treat you this way. And if they do, feel free to give me a call.

P.S. – Below is a picture of Coach Leach and I at Night with Cougar Football. He was gracious enough to sign my copy of Swing your Sword. The exact words that he wrote in my book are “From one Lawyer to another Lawyer. –Mike Leach”. What a guy.